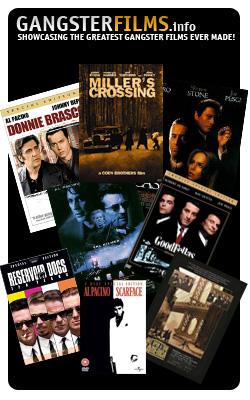 Gangster film is a film genre which features gangster characters, such as members of the Mafia (as well as members of similar organized crime groupings of other ethnicities and nationalities) and inner city street gangs.

Gangster films typically focus on the power struggles within gangs rather than on the policemen who try to stop them (although there are exceptions, such as The Untouchables). The most common storyline depicts an individual's rise to power within the organization, followed by his betrayal and murder by the gang or being killed by police. This story offers a moral message against crime, while also permitting the audience to vicariously enjoy the gangster's exploits.